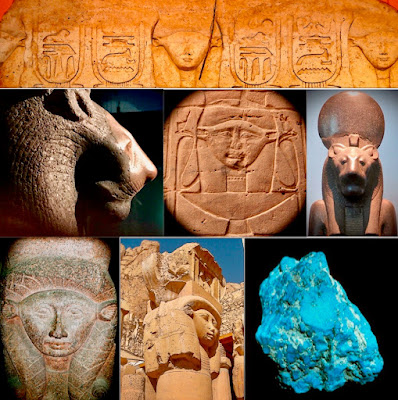 Hathor Sekhmet was the Great Destroyer of Humankind, Mistress of Terror. Hathor was also the Mistress of Turquoise, love and intoxication. 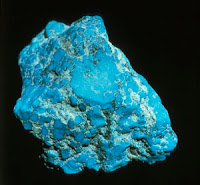 From time immemorial Egyptians penetrated the desert in search of her sacred stone, turquoise, particularly in the Sinai where mining expeditions built a distant shrine at Serabit el-Khadim, dedicated to the patron goddess of miners and quarrymen. The turquoise droplets must have seemed like a mockery of moisture to the ancient criminals and captives of war who dug the nodules out of fissures of sandstone in the desert. These same men prayed for the protection of Hathor, ‘Mistress of Turquoise’, ‘She who shows her loveliness when the rock is split’. Would the goddess have cared that they gave their sweat and lives to mine her precious stones, so that rich ladies in Egypt, her devotees, could grace their necks with sumptuous broad collars of turquoise, their arms with turquoise bracelets, their fingers with rings inlaid with turquoise? Did the captives, dazed with thirst and heat, ever raise their eyes from their work in the mining camps to the turquoise sky and rock-strewn horizon and imagine that perhaps they glimpsed Hathor overlooking them from the dazzle? Did they picture her as an ardent young woman under a sycamore tree, or in the form of a lioness of the desert, Sekhmet-Hathor? Hathor features in The Smiting Texts, Hathor's Holocaust and Hunting Hathor (Amazon Kindle) 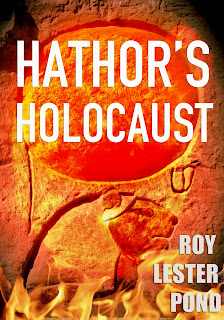 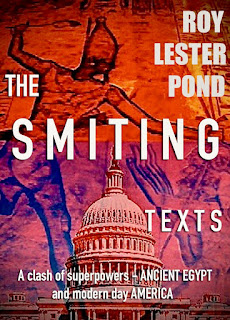 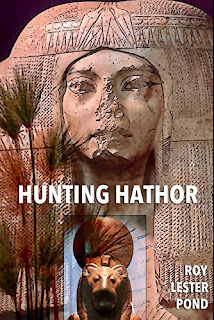 Roy Lester Pond
ENTHRALLING MYSTERY... Roy is a prolific author of possibly the largest collection of ancient-Egypt inspired fiction under the sun today. His depth of knowledge as a writer of fiction on Egypt comes from a lifetime spent studying ancient Egypt and Egyptian archaeology and makes numerous research trips. Roy is fascinated by the mystery of ancient Egypt and its potency and relevance for today’s world. ‘The Smiting Texts’ was his first archaeological thriller, followed by a series featuring renegade Egyptologist Anson Hunter, as well as other stand-alone adventures. Roy spent much of his life in Africa and now lives in Australia. Roy Tweets regularly about Egypt and adventure fiction writing under the Twittername “Egyptsnippets” and writes a blog ‘Ancient Egypt Fiction&Facts’. Email: roylesterpond@me.com

MURDER On The Nile MYSTERY CRUISE 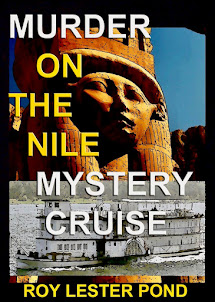 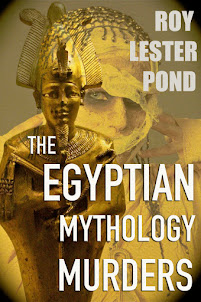 ANSON HUNTER - 3 BOOKS IN ONE 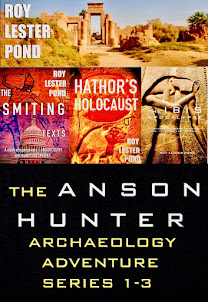